Catch up with the latest developments at BBD.

A Tradition of Giving Back: BBD Partners and Staff Travel to Kentucky for 7th Annual Week of Service 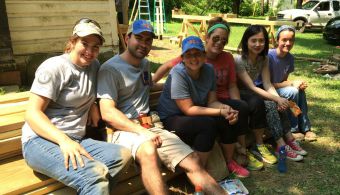 This year marked the fifth time BBD employees have served the people of Eastern Kentucky through the Christian Appalachian Project, a not-for-profit organization in the area, and the seventh time BBD has completed a week of service.

This year, volunteers from the firm split into two groups, doing Habitat for Humanity-style work in Jackson and Rockcastle counties for the week. One group spent the trip performing much needed structural repairs to an aging home, while the other group built a wheelchair ramp at the home of a woman with limited mobility.

“We have been very fortunate at BBD,” said managing partner Mike Boyle. “Because we have been so fortunate, it is our responsibility to reach out where help is needed, not just with monetary support but also with our hands and hearts.” Boyle has always believed in giving back, but seven years ago, inspired by the ABC News 20/20 special, “A Hidden America: Children of the Mountains,” he committed to an extended service trip to Kentucky. After years of serving many of the seven counties in the eastern part of the state that are on the U.S. Census Bureau’s list of the 50 poorest counties in the country, the trip has become a true firm tradition, allowing employees to bond while helping others.

When the entire group was gathered for the final dinner on the last night in Kentucky, Boyle thanked firm members for their participation in the trip, saying, “it was the best one yet.”