Partnership Taxation: What You Should Know About Section 754 Elections

A Section 754 election can be a favorable tax efficiency tool that is unique to partnerships (as compared to corporations).  However, the complexity, administrative burden and changing economic environment should always be considered carefully.  Every general partner of a partnership should be aware of these rules and their implications.

These two differing approaches are highlighted by the concept of “inside” and “outside” tax basis with respect to partners of a partnership.

Situations Where a Basis Adjustment Can Be Made

There are two Sections in Subchapter K that allow for basis adjustment if a Section 754 election is in place when the inside and outside basis differ.

Section 743 – Transfer of an interest in a partnership by sale or exchange or on death of a partner.

Section 734 – Distribution of partnership assets to a partner.

Differing inside and outside basis can have significant impacts on the timing and character of gains and losses recognized by the partners.  To illustrate this, see the example below.

This example refers to a Section 743(b) adjustment.  These adjustments are more common with hedge funds and private equity funds.

Investment Partnership ABC is formed by partners A, B, and C, contributing $1 million each.  ABC purchases a portfolio of stocks and retains some cash to pay expenses.  Below is the balance sheet immediately after the formation: 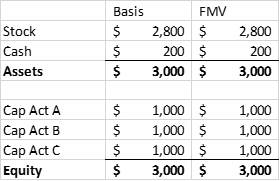 After a period of time, the portfolio of stocks increase in value.  However, Partner A decides to sell his investment to Partner D, equal to the FMV of his capital account.

BEFORE SALE OF INTEREST

AFTER SALE OF INTEREST 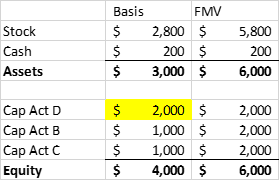 Partner D has an outside basis equal to the purchase price of $2 million.  However, his allocable share of the partnership’s inside basis in the stock is $1 million (1/3 of $3 million).  Partner A realized a $1 million gain from the sale of his partnership interest, which was the result of the unrealized appreciation of the stock portfolio.  If Partnership ABC subsequently decides to then sell its portfolio of stocks, it would realize a gain of $3 million, which would then be allocated to the remaining partners (including Partner D). 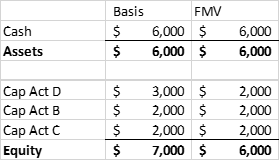 The effect is that both Partner A and Partner D were taxed on the same gain, which is obviously not an optimal outcome.

If in a later tax year the partnership decided to liquidate, Partner D would realize a tax loss of $1 million (as the result of a higher tax basis).  This would seem to correct the earlier double tax situation. However, there is the issue of the timing as well as the limitation on the deductibility of a capital loss.  If Partner D is an individual who does not have capital gains to offset the capital loss in the year of liquidation, he is limited to a deduction of $3,000.  This could result in a double tax situation that may take a significant amount of time to correct.

How the Adjustment Works

Again, it’s important to remember that with IRC Section 743(b), the entire basis step up is allocated to the transferee partners.

The regulations under IRC Section 755 provide guidance regarding how to allocate the basis adjustment.  There are three scenarios described in the regulations:

For purposes of this post, we will focus on the Section 743(b) transfer with non-substitute basis as that is the most applicable to hedge funds and private equity funds.

FMV is assigned to all partnership assets, and all assets must be classified as either capital assets/Section 1231 property (capital gain property) or other property (ordinary income property).  In a fund context, the vast majority of assets would likely be capital gain property.  First, the basis adjustment is allocated among the two classes and then allocated to each asset within the class. 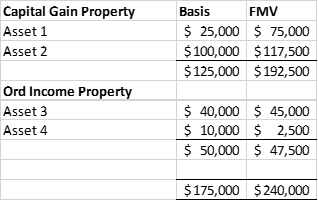 As you can see from the above example, the election to “step up” the partnership’s basis in its assets is a taxpayer friendly election.  Unfortunately, when a situation arises where a partner’s outside basis is less than his respective inside basis, a partnership may be required to “step down” the basis.  In the example above, we saw how, absent a basis “step up,” a double tax situation could result.  Similarly, when outside basis is less than inside basis, a situation could arise where two taxpayers take the same deduction.

Substantial Built-in Loss (Section 743): The total of the partnership’s tax basis in its assets exceeds the total Fair Market Value of its assets by more than $250,000 immediately after the transfer of interest.  Again, this is only allocated to the transferee partner.

There are a few other items that should be taken into consideration before a fund makes an IRC Section 754 election.  First, it is irrevocable without consent from the IRS.  Once the election is in place, any transaction that meets the definition of Section 743 or 734 will require a basis adjustment, whether it is tax favorable or tax unfavorable.  In the hedge/private equity space, a Section 754 election could be made in a time when the fund is in a net appreciated position, but the markets could change and the fund could find itself in a net depreciated position when Section 743 or 734 transactions occur.  This is something that should be taken into account.

Additionally, because the adjustment is made on an asset by asset basis, and because there could be multiple Section 743 or 734 transactions, it is possible that the tracking of the adjustment could become administratively burdensome.  This should be factored in as well.

A Section 754 election can be a favorable tax efficiency tool that is unique to partnerships (as compared to corporations).  However, the complexity, administrative burden and changing economic environment should always be considered carefully.

Furthermore, the mandatory basis reduction should always be considered as this can prove to be a trap for the unwary.  Every general partner of a partnership should be aware of these rules and their implications.