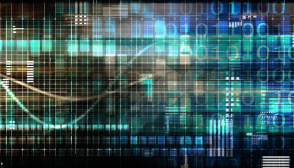 These agreements effectively act as an enticement for potential shareholders to invest in a developing fund by offering a guaranteed maximum expense exposure. Absent this type of agreement, the developing shareholder base would likely be subjected to higher expenses as the fund attempts to build assets.

Recently, we have had questions from clients and other industry partners regarding the appropriate tracking and presentation relative to recoupment of previously waived expenses.

In a single-class fund, the treatment and tracking of recoupment is straightforward. Consider the following history for expense waivers and that during fiscal year 2021 the fund has increased assets to the extent that the expense ratio falls below the limitation and the advisor is able to recoup previously waived expenses in the amount of $15,000. The recoupment reduces the earliest expiring waiver available by the same amount, and the advisor is left with the difference between what had been waived and what has now been recouped as available for recoupment going forward limited by the expirations noted. 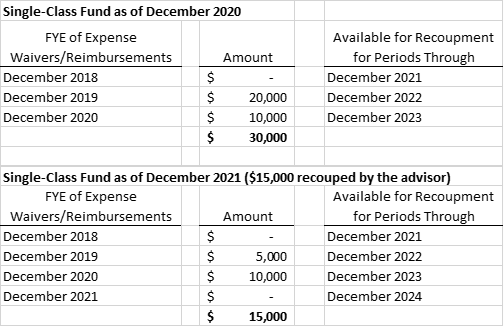 Note: Recoupment is generally permitted for up to three years from the time the expenses were waived and therefore these amounts are reflective of a rolling three-year period.

Now, assume a multi-class fund scenario and keep in mind that Rule 18f-3 of the Investment Advisers Act of 1940 does permit class-specific expenses to be waived at different amounts for different classes but also requires a fund’s Board of Directors to monitor waivers to guard against cross-subsidization among the classes. Consider the following ideals along with the principles of Rule 18f-3:

The following schedule illustrates the application of expense recoupment in a multi-class scenario with differing recoupment amounts per class. 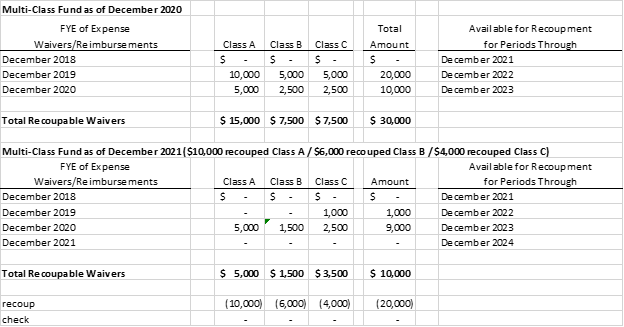 Note: Recoupment is generally permitted for up to three years from the time the expenses were waived and therefore these amounts are reflective of a rolling three-year period.

There has also been some uncertainty and divergence of practice in the industry in the way of financial statement presentation relative to expense recoupment. With respect to the original waiver of expenses, Financial Accounting Standards Board Accounting Standards Codification (“ASC”) 946-20-50-7 provides clear guidance in that the waivers are to be presented as a reduction of expenses in the Statement of Operations, and industry practice generally results in a “below the line” presentation whereby the statements show gross expenses, waivers as a reduction and then net expenses. The financial highlights follow suit by illustrating the impact of the waivers on the expense ratio generally as gross and net expenses. The terms of the waivers are also to be disclosed in the notes to the financial statements, including a notation regarding the aggregation of waived expenses potentially reimbursable to the advisor but not recorded as a liability as per ASC 946-20-50-6.

The argument for presenting the expense recoupment “above the line” (in gross expenses) is that this presentation is consistent with the requirements of Form N-1A, which would show gross expenses and then the expense waivers separately for transparency purposes. While this explanation has some validity, the problem is that this suggests that the requirements in Form N-1A are driving the Generally Accepted Accounting Principles presentation. Many would argue they should not be.

Alternatively, those that believe the expense recoupment should be presented below the line feel that the spirit of gross expenses in the Statement of Operations is to present the actual operating expenses of a fund absent the waiver and reimbursements that may be taking place – the true cost of operating the fund for the year. Just as the industry presents expense waivers below the line, so should it present the recoupment of such expenses.

In fact, at a recent virtual conference, an SEC staff member recognized this topic and the fact that the AICPA Investment Companies Expert Panel would be addressing it presently. Ultimately, it sounds likes the SEC is encouraging management of the fund to use its best judgment in terms of presentation and considering relevant facts at hand but that they don’t necessarily have concerns about the placement in the Statement of Operations.