What You Need To Know About IRC Section 704

Throughout this post, I will make reference to “securities partnerships." The regulations define a securities partnership as a partnership in which at least 90% of the non-cash assets that constitute personal property (including stock and securities) are actively traded, and the partnership reasonably expects to perform a revaluation at least annually.  In practice, most hedge funds easily meet both these requirements. As such, they are subject to some special exceptions that will be discussed in depth throughout this post.

In general, the IRS allows for the partnership agreement to dictate the tax allocations. Section 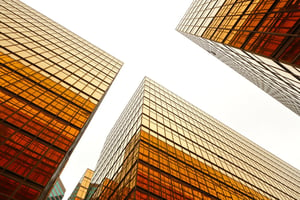 704(b) and the corresponding regulations, however, require that, to be respected by the IRS, the allocations must have substantial economic effect.  This concept can be broken up into two parts.

Economic effect means that the “economic burden or benefit” that results from an allocation must be borne by the partner who received that allocation.  Economic effect is deemed to be achieved if the partnership agreement provides for the following:

Substantial in this context is referring to the ability to shift tax consequences between the various partners.  Allocations will not be considered “substantial” if the “economic effect” of the allocation results in a situation where the shifting of tax consequences between partners results in a net tax decrease of one partner that is not offset by a net increase of another.  The concept of “substantiality” is a bit more complicated and subjective than “economic effect." However, there is an “after tax” component to the economic effect of the allocation that needs to be considered.

The capital account determination and maintenance rules are detailed in Treas. Reg 1.704-1(b)(2)(iv).  Each partner’s capital account is increased by money or the fair market value of assets contributed to the partnership as well as the allocations of partnership income and gain, and decreased by the money or fair market value of assets distributed as well as allocations of partnership losses or deductions.  Capital accounts tend to mirror GAAP and are typically used by fund investors to track the value of their investment, since they typically reflect the true economic value.

As detailed in part (f) of this Regulation section, capital accounts are adjusted for the revaluation of assets in certain situations. For example, capital accounts are adjusted to reflect the fair market value of the partnership assets.  For regular operating partnerships, this is permitted typically in connection with a new contribution of money or property, a distribution or liquidation, or the grant of a new partnership interest.  However, for securities partners, revaluations can be done at any time.

A partnership need not have “contributed” built-in gain or loss property for Section 704(c) to apply.  The principals of 704(c) apply to property that has been revalued pursuant to 704(b) and have differences between book value and the adjusted tax basis that result from the revaluation.  Remember, as we discussed above, revaluation produces “book” gain or loss that impacts the capital accounts. However, it does not produce tax gain or loss.  This essentially creates a scenario in which assets have “built-in” gain or loss for purposes of Section 704(c) that need to be considered for allocation purposes.

When discussing the principals of Section 704(c) allocations, it is important to understand the following terms:

Forward Section 704(c) Allocations:  This refers to the allocation of future realized gains or losses dictated by unrealized gain or loss on contributed property.

Reverse Section 704(c) Allocations:  This refers to the allocation of future realized gain and loss dictated by unrealized gain or loss on revalued property.

For purposes of this post, we will focus on reverse 704(c).

The purpose of Section 704(c) is to remove or reduce the disparity between the capital account balances (i.e. book basis) and the adjusted tax basis of each asset.  As the entity revalues its assets on a periodic basis, the entity's book basis changes, while the tax basis remains the same.  When a gain or loss is eventually realized, that gain or loss should be allocated in proportion to each partner's relative disparity.  The effect is that the book-tax disparity will be reduced or removed.  See the example below:

Partnership ABC holds two stocks (Y and Z).  Partners A, B & C have the following tax basis and capital account balance for each of these investments: 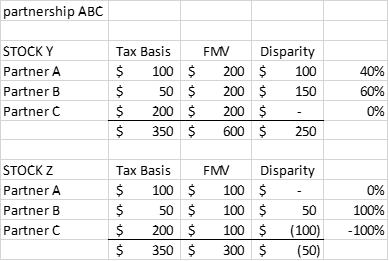 After the last revaluation, both stocks had some depreciation.  The partnership sold both stocks and recognized a realized gain of $200 for Y and a realized loss of $(120) for Z.

The first $(100) of realized loss would be allocated to Partner C and would remove his/her disparity.  Subsequently, there is no additional negative disparity that can be reduced or removed by allocating realized losses. Thus, the partners share the remaining $(20) equal to each partner’s economic interest in the partnership.

The example above reflects the requirement in the regulations that Section 704(c) be tracked on an asset by asset basis.  There is an exception in the regulations, however, for a securities partnership to aggregate all of its assets as opposed to tracking each asset separately.  The purpose of this exception is to reduce the administrative burden that would result in separately tracking each asset.  The idea is that each asset in a securities partnership is fungible and not separate and distinct from the other assets.

Disparity on an Aggregate Basis (using example above)

As this example shows, the benefit of the partial netting method is that it removes book-tax disparity at a faster pace.  It is, however, more likely to result in situations where partners with positive disparity (partners A & B in this example) are actually allocated realized losses, which further increases their disparity.

As with the aggregate method, securities partnerships also have the ability to special allocate realized gains and losses in certain situations.  Most partnership agreements will have a “stuffing provision” that provides the general partner the ability to specially allocate gains or losses to withdrawing partners.  When the fund makes a liquidating distribution to the partner equal to his/her capital account balance, there will typically be some book-tax disparity. The stuffing provision allows for the partnership to allocate realized gains or losses to the withdrawing partners equal to an amount that will align the tax basis to the liquidating proceeds.  The withdrawing partner will then not recognize gain or loss on the liquidation of his/her partnership interest (under section 731) because the tax basis is equal to the liquidation proceeds.