One of the main provisions of the 2017 Tax Cuts and Jobs Act (“TCJA”) was Section 163(j), which limits the deductibility of business interest expense (“BIE”) for corporations. On July 28, 2020, Treasury and the IRS released proposed regulations that provided substantial guidance, specifically with its application to Regulated Investment Companies (“RICs”).

As noted above, the Section 163(j) limitation is specially for BIE.  At first glance, you might think that this is not applicable to RICs, as the vast majority of their income and expense is derived from passive sources. 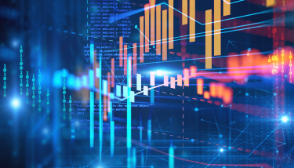 Section 163(j) limits the amount of interest expense deduction for a given year to the sum of Business Interest Income (“BII”), 30% of adjusted taxable income (“ATI”), and floor plan financing of the taxpayer for that year.  However, this limitation has been modified to 50% of ATI per the Coronavirus Aid, Relief, and Economic Security Act (“CARES Act”) and applies to taxable years beginning in 2019 or 2020.

For purposes of this post, we can disregard the floor plan financing.  ATI is taxable income that is adjusted for various items (please see calculation below).  Please note that this is not a complete list, and any items not relevant to RICs were excluded.

RICs, however, typically have taxable income of zero due to the dividends paid deduction (“DPD”), which the RIC obtains by distributing its investment company taxable income (“ICTI”) and gains to the fund shareholders.  If a RIC were required to include the DPD in its ATI amount, it would severely limit the RIC’s ability to deduct BIE.  The proposed regulations, however, specifically state that when a RIC is calculating ATI, it should exclude the DPD.  Other special deductions (Dividends received deduction, 199A deduction, etc.) would be included IF the RIC itself took the deduction, however this is very unlikely.  Typically, instead of taking these deductions, the RIC passes them through to shareholders and relies on the DPD to reduce ICTI to zero.

Impact of a RIC’s Earnings and Profits

To the extent that a corporation makes a distribution out of earnings and profits (“E&P”), it is considered a taxable dividend to that corporation’s shareholders.  While not defined in the tax code, E&P is based on the corporation’s “economic ability” to pay a dividend, as opposed to its taxable income (which is impacted by non-economic tax rules).  With this in mind, the proposed regulations state that any disallowed interest expense should still reduce E&P in the year that the expense is incurred, due to its impairment on the corporation’s ability to pay a dividend.  Similar logic is used for net operating loss carryforwards, which reduce E&P in the year incurred as opposed to utilized.

There is a modification for RICs, however.  The disallowance of the expense could result in the RIC having a distribution requirement, while simultaneously possibly not having the E&P to support the distribution due to the E&P reduction.  As such, Treasury has stated in the proposed regulations that the RIC will deduct the interest expense from E&P in the year that it is ultimately deducted as opposed to incurred (or when the corporation no longer is considered a RIC).

Impact of Passthrough Interest and Expense

The proposed regulations include a provision that allows for RICs to pass through BII to their corporate shareholders (referred to as Section 163 interest dividends).  Without this provision, RICs would be at a disadvantage compared to their non-RIC counterparts.  For example, a corporation investing in a money market fund structured as a partnership would receive distributions that would be predominately interest in character, while a similar money market fund structured as a RIC would distribute income that would be characterized as a dividend (for which a corporate partner would not get the benefit for Section 163(j) purposes).

Section 163(j) interest dividends are the mechanism by which the RIC can pass through this business interest and allow their corporate shareholders to increase their ability to deduct business interest expenses.  There are limitations at both the fund level and the shareholder level, however, detailed below.

RIC X had the following income and expenses during the year, and as a result distributed $80.  Shareholder A, a corporation, owned 10% of the fund. 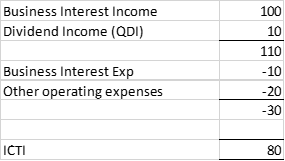 To determine the fund’s Section 163(j) dividend, the fund must allocate both the interest expense and other operating expenses.  Fund X can pay an interest dividend up to $71.82

Shareholder A received an $8 dollar dividend.  $1 of that dividend was QDI (10% of $10), and up to $7.18 of that dividend could qualify as an interest-related dividend (10% of 71.82).  Assuming shareholder A takes the $1 amount of QDI (one of the conduit items), they are limited to $7 of interest dividends (assuming applicable holding period requirements are met).